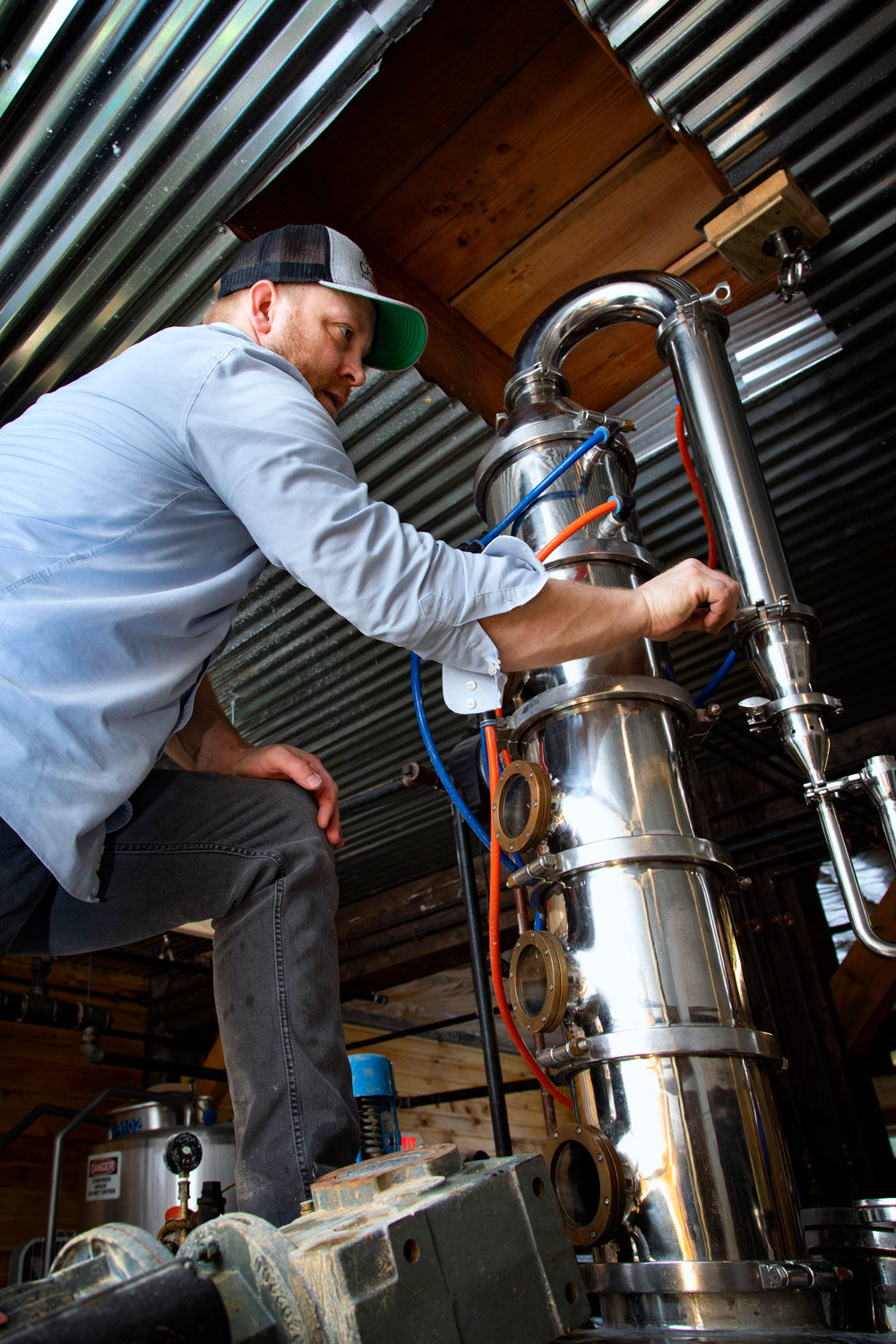 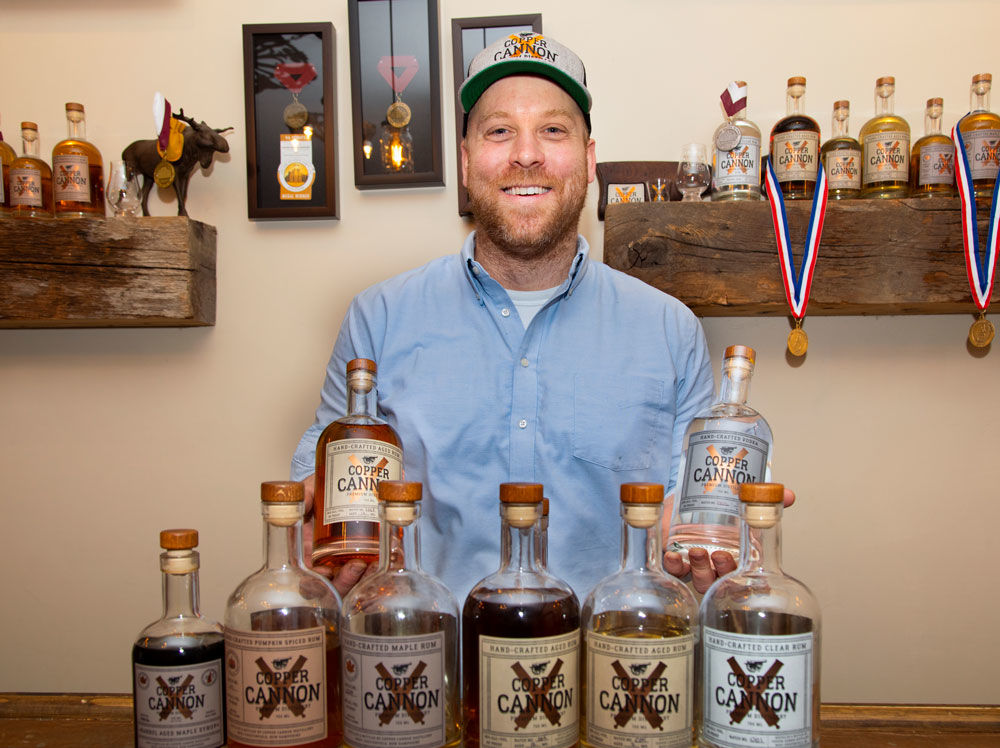 It’s the golden age of craft spirits, both nationwide and right here in New Hampshire and Vermont.

The most recent Craft Spirits Data Project report from the American Craft Spirits Association shows the number of active craft distillers in the U.S. grew by 15.5% to 1,835 in August 2018. Of that number, 13 distilleries are in New Hampshire.

Twenty years ago, there were no distilleries in Vermont — today, there are 20. Two in the state — Saxtons River Distillery in Brattleboro and Smugglers’ Notch Distillery in Jeffersonville — were within the Top 10 last year on the list of the country’s best craft distilleries list as part of USA Today’s annual 10 Best Reader’s Choice Awards.

Total sales and revenue, market share, investment and employment in the industry are all rapidly on the rise, and forecasts are that the trend continues in the years ahead.

“The trend is driven by millennials — they are very discerning about what they are getting and where it’s from,” notes Peter Jillson, CEO of Silo Distillery in Windsor, Vermont, which has been in business for seven years. The year they started, he adds, there were only about 400 distilleries nationwide.

“What’s different (about operating a distillery) in rural New England is that we’re here for a reason — it’s all about sustainability,” he says.

The millennial demographic is interested in businesses that operate sustainably, which in the case of a distillery, means ingredients are sourced locally. SILO Distillery’s grain comes from a Vermont farm.

“A by-product of the distilling process is stillage,” says Jillson. “The farmers take it and give it back to the farm animals.”

Jillson’s first goal for the business was investing in a 650-liter (172-gallon) German still and making a vodka, which requires no aging time and takes about seven days from farm to bottle.

“It’s all about starting to create revenue streams,” says Jillson of his business, which has a 35% annual growth rate and now employs 15, up from three when it opened. Since then, the company has added an aged gin, maple whiskey, bourbon and hard cider to its product list (the hard cider is created under a wine license) as well as a service to make a private label product on the premises. Plus, they are continually working on adding new products.

“We are very nimble,” notes Jillson. “We can look at something that would be an interesting opportunity, and we can do it. We watch the market and plan what makes the most sense, and we watch our spending.”

While Vermont and New Hampshire are among the nation’s 17 control states (meaning the state has a monopoly over the wholesaling and retailing of alcoholic beverages), Jillson says there is an active craft spirits organization in Vermont involved with legislation to make it easier for distillers to sell directly to their customers.

“At the end of the day, if it’s easier for us and the state is getting a piece of the pie, everybody wins,” he notes.

It helps that a federal tax cut for alcoholic beverage producers, known as the Craft Beverage Modernization and Tax Reform Act, was extended through 2020. The legislation reduced the amount that all distilleries paid on the first 100,000 proof gallons from $13.50 to $2.70 (a proof gallon is a gallon of spirits at 50% alcohol). Such excise taxes are paid on top of regular corporate taxes.

That tax cut was set to expire at the end of 2019 but was renewed for one more year as part of a government funding bill signed into law.

Without the extension, most alcoholic-beverage producers would have seen their excise taxes rise 400% starting Jan. 1, with the first payment due, in many cases, jus two weeks later.

“We’ve reinvested that money (saved) into the business,” notes Jillson.

A tasting room and outdoor patio have been added over the last few years, which draws tourists — the distillery is located right off the Interstate 91.

From Jillson’s view, there is no such thing as competition in this business.

“We’re all collaborative — we’re all driving the industry,” he says. “We all want more shelf space.”

Blake Amacker, co-owner of Copper Cannon Distillery in West Chesterfield, one of two distilleries in the Monadnock Region (New England Sweetwater Farm and Distillery in Winchester is the other), has grown his business slowly — his sales are up this year by 15-20% from when he opened in 2018 — but it is growing to match the rest of the country.

By trade, he’s an aerospace engineer and works full time at Corning Inc. in Keene while operating Copper Cannon Distillery nights and weekends.

While the state liquor stores are helping to raise awareness of his product, he loses a third of his profits to the liquor commission.

Other state regulations can make it difficult for distilleries to thrive, he adds. Samples are limited to a half-ounce of each liquor label per customer, and distilleries have to apply for a separate $1,200 license to mix cocktails.

Once his establishment is more stable and better known in the area, Amacker says he has a strong interest in igniting change at the state level.

On the flip side of that coin, he recognizes the benefit of the federal excise tax cut on his business. Driving more traffic to his distillery is his main goal.

“The biggest thing to be successful (as a distiller) in New Hampshire is getting people there,” he says.

The way to do that starts with a base product that is high-quality and like SILO Distillery, made sustainably. Copper Cannon helms the entire process from fermentation to distillation and aging in a 250-gallon still.

The majority of the distillery’s grains come from a local farm and from Valley Malt, a seller that offers artisanal malts from locally-grown grains for craft and homebrewers. And when the fermentation is done there’s a guy who comes and picks up the grain and feeds it to his cows, Amacker says.

While there is always some trial and error, Amacker is meticulous.

“We don’t want to be like anybody else,” he said.

Samplers in the tasting room can try a barrel-aged rum made with maple syrup from a Sullivan farm; a clear, chip- or traditional barrel-aged rum; pumpkin rum, potato vodka or bourbon. This year he will do a limited-release gin, and next year he will release a rye and single-malt whiskey, both barrel-aged. Part of the tour he offers involves educating the public.

While he wants his product to stand out, he realizes that a concentration of distilleries could encourage tourism in the Monadnock Region, possibly leading to the creation of a Cheshire spirits trail.

“There’s a ton of potential here,” he says.

While the craft spirits industry has been booming nationwide, the craft beer industry has slowed after years of posting double-digit growth, to increases of about 4-5% in the last several years, according to the Brewers Association. Though it’s important to remember that even those single-digit gains continue to outpace the overall beer market, which has been down 1-2%, which may be due to microbrewery saturation.

New Hampshire has seen an influx of new breweries. Of the nearly 80 in the state (there are 63 in Vermont, including Hill Farmstead, which won the number one spot in a worldwide list of the top brewers), 11 are in the Monadnock Region, and several of that number have opened for business within the past few years.

That may be due to a 2011 law that created nanobreweries as a separate class of businesses, with fewer barriers to getting started.

Trevor Bonnette, co-owner of Branch and Blade Brewing Co. in Keene, which opened in 2018, has more than doubled his production.

Four new tanks and a canning line have allowed the brewery to control its fate with scheduling.

While they doubled their capacity, Bonnette says they didn’t need to expand their brewing system, the most expensive element of a brewery.

Since the beginning, they have brewed 110 different varieties (some sold by the can and others by draft pour), and their profit margin is between 30-40%.

Some, like Bonnette, credits the growth of the buy local effort for raising interest in craft beers.

“Keene isn’t a huge city, but people are enthusiasts and have a real passion,” he says. “Beer is all about fun and community — it’s used to bring people together.”

After 24 years of continuous growth in wine consumption in the U.S., it slowed to a 1.2% growth year-to-year in 2018, according to the 2019 State of the Wine Industry Report. Experts cite several reasons, such as the growth of products that millennials prefer, such as craft spirits and cannabis.

The dollar value of wine continued to grow that year at a rate of 3.7%, suggesting that consumers desire higher-quality wine and are spending more per bottle. This indicates wine marketers need to get more creative to bring new consumers into the category.

There is roughly the same number of wineries — 25 — in New Hampshire and Vermont, operating as both small and large-scale operations.

Labelle Winery in Amherst, New Hampshire, is on the large-scale end. What began as an experimental one-gallon batch of blueberry wine made in founder Amy Labelle’s Boston apartment has morphed into a 20,000-square-foot space that includes a bistro, tasting bar, art gallery, gift shop and event space and employs 125.

Roughly 2,000 vines grow on Labelle’s three-plus acres of vineyard, and the winery also sources grapes from other growers in New England, the Finger Lakes region of New York and Washington State. Labelle’s Amherst Vineyard Red and Amherst Vineyard White are among its 100% New Hampshire wines.

She’s also expanding into the lucrative craft spirits business. This summer, construction will begin on a distillery on 50 acres across the road from the winery along with a tavern and fresh foods market.

“We’re making more and more wine every year,” she says. “The demand is there.”

“People of New Hampshire realize good-quality products can be made here,” she notes. “My philosophy has always been that if we produce the best possible product we can make from the best possible fruit I can get or grow, the wine will be excellent.”

Poocham Hill Winery, located along a dirt road three miles off of Route 9 in Westmoreland, has been a player in the local wine industry for nine years and has doubled in volume of cases sold. Still, owners Steve Robbins and Mame Odette are happy keeping their business at its current size.

They make wine from their own grapes, and production depends on the weather that year; they’ve only had one bad year, says Robbins. They consider their winery more of an agricultural business.

They could have moved their expanded tasting room to Route 9 but decided they were happy doing what they are doing: educating people about the grape growing that is specific to this region.

His recipe for success in the craft beverage industry in northern New England is along the same idea as it is for just about any locally-produced product: the place is the thing.

“It’s more about creating an experience for people who come to visit and giving them something exciting and fun so they’ll tell their family and friends,” he says. “That’s very important.”