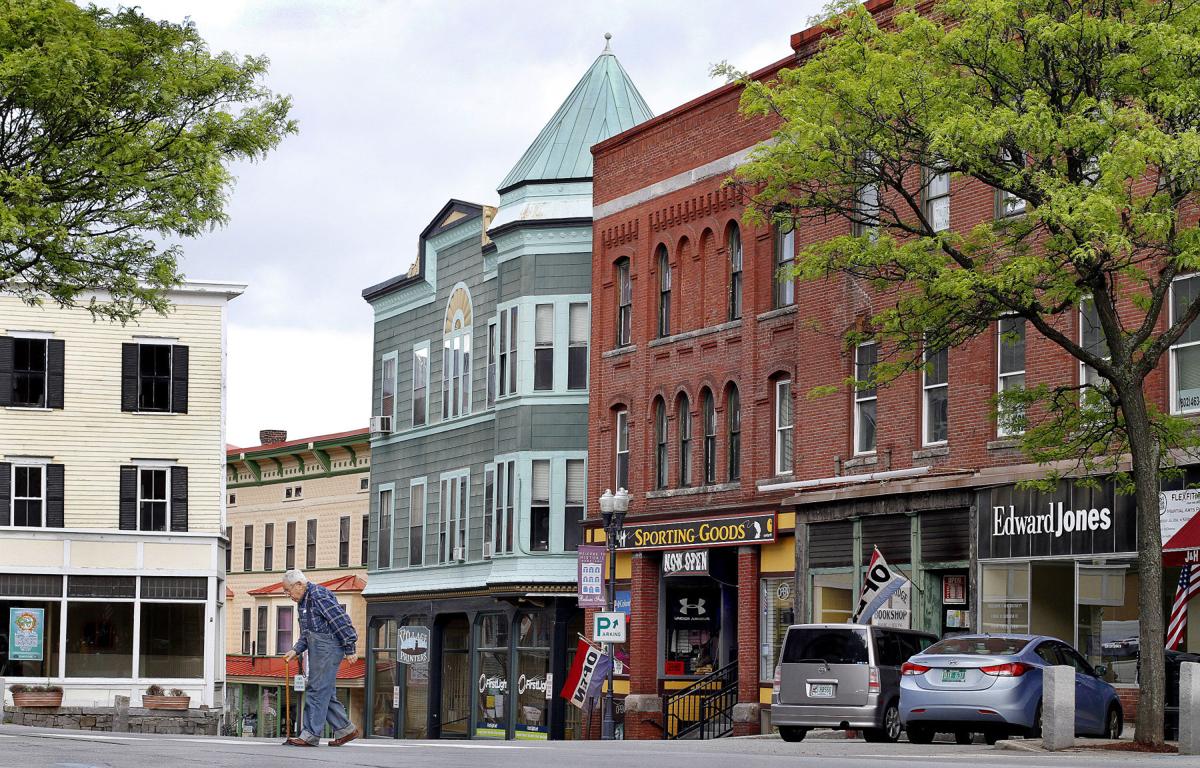 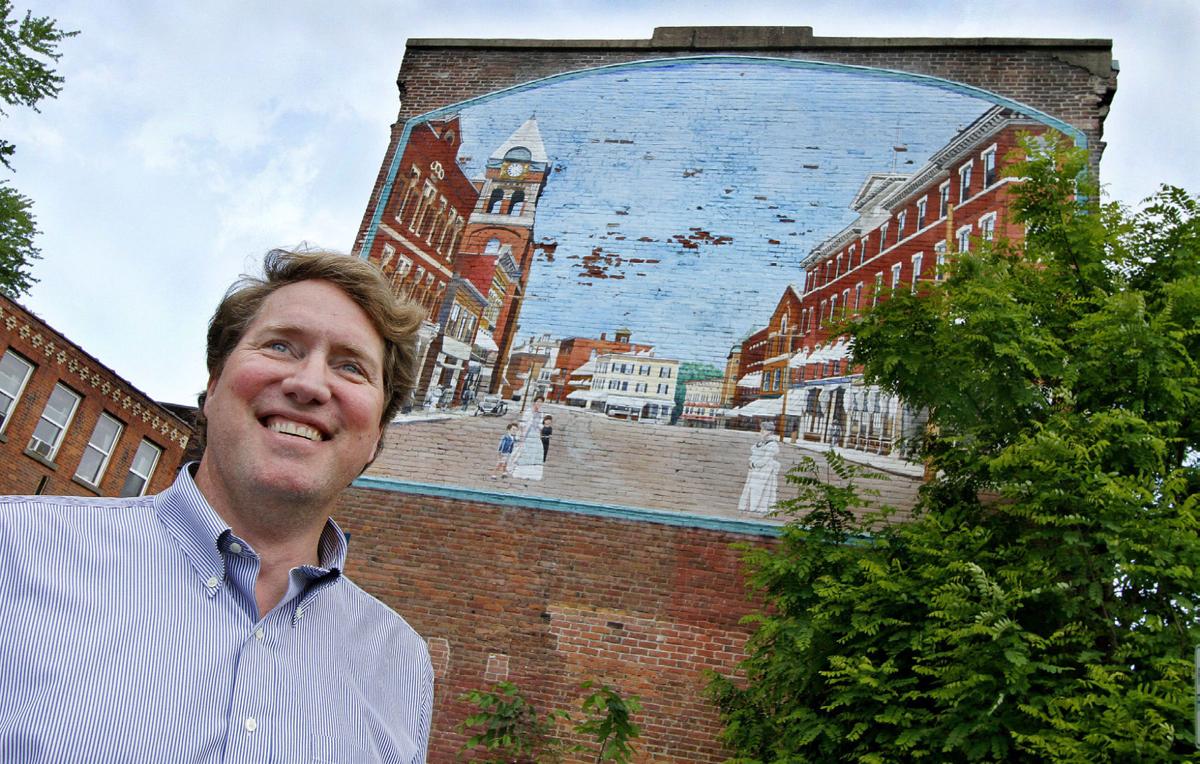 Bellows Falls Area Development Corp director Emmett Dunbar near the mural of the village with is slated to be restored this summer through a partnership with the Corp and R.A.M.P, Rockingham Arts and Museum Project. 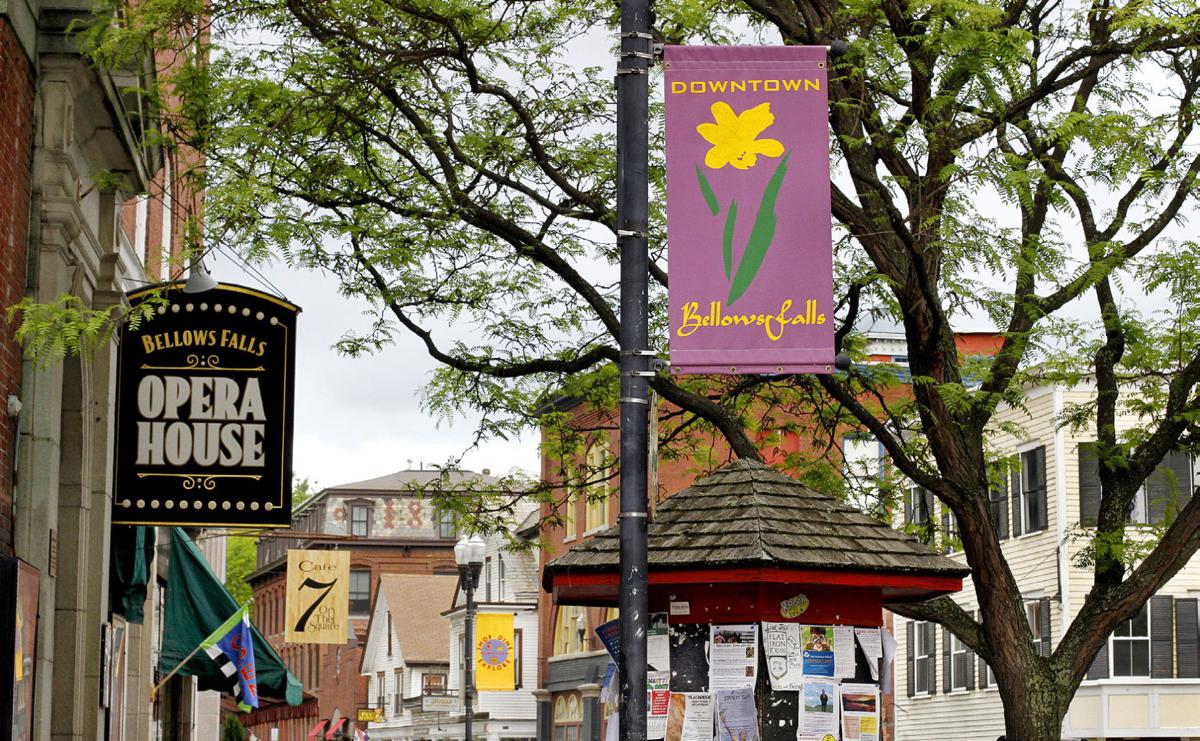 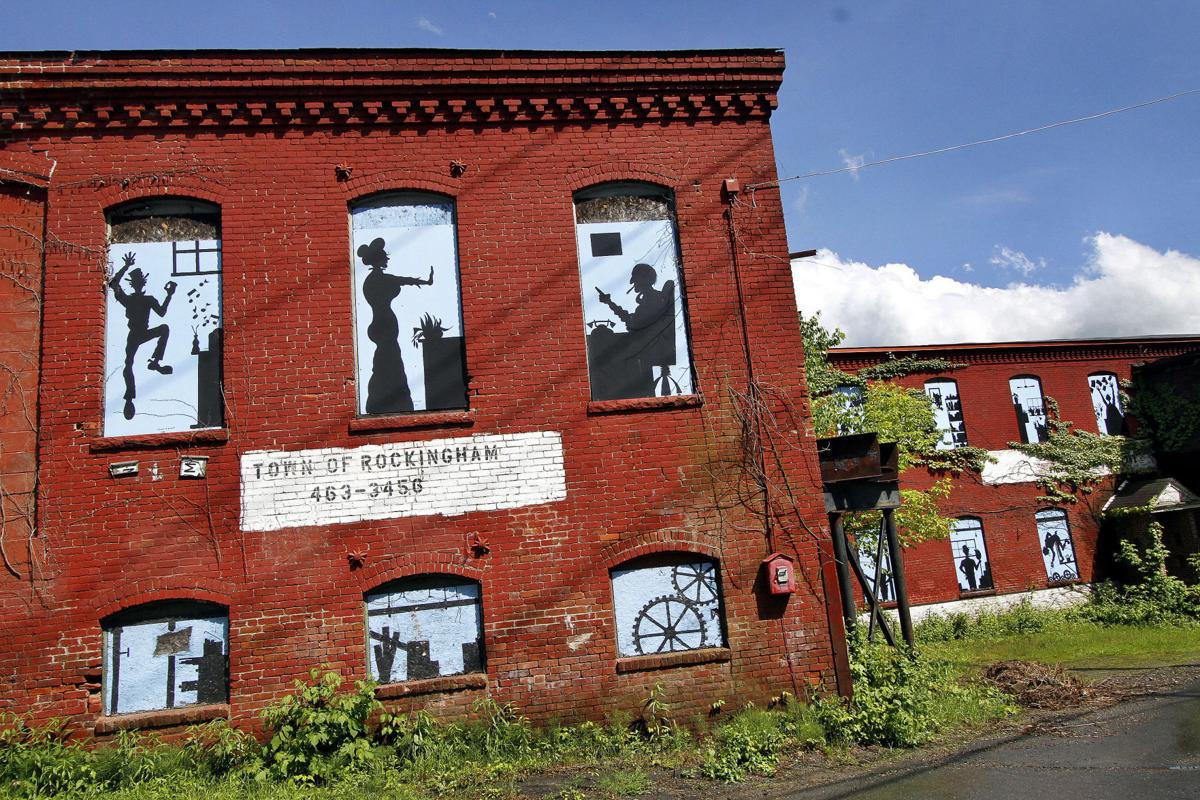 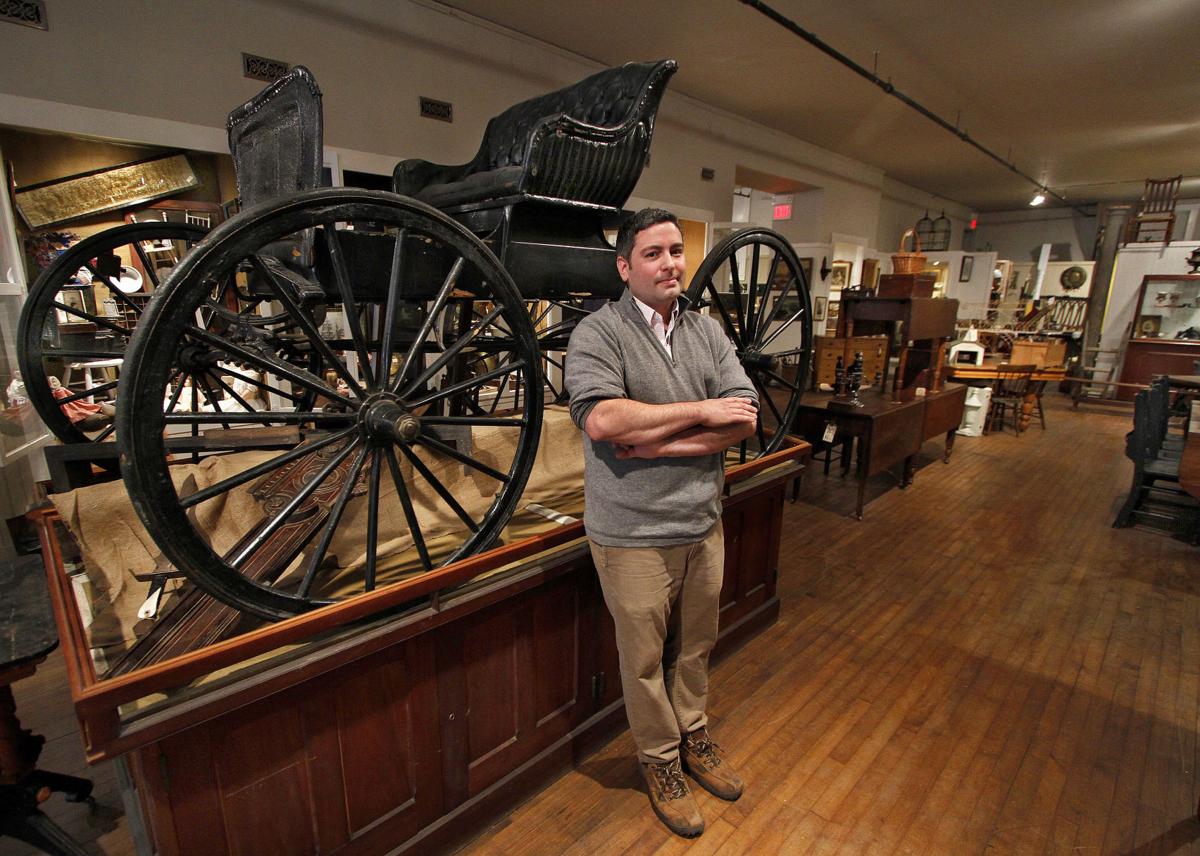 Michael Bruno, of Windham Antiques in Bellows Falls, next to an 1890's Victorian horse buggy.

Bellows Falls Area Development Corp director Emmett Dunbar near the mural of the village with is slated to be restored this summer through a partnership with the Corp and R.A.M.P, Rockingham Arts and Museum Project.

Michael Bruno, of Windham Antiques in Bellows Falls, next to an 1890's Victorian horse buggy.

It’s all about the bones. The bones of the old buildings in Bellows Falls, Vermont. That’s what’s bringing back this town in Wind­ham County that went through some bumps, scrapes and bruises for almost 100 years.

This town, actually a village within the Town of Rockingham, is dominated by a huge clock tower, another metaphor for what hap­pened to it just after the Great Depression; the fact that time seem­ingly forgot about it.

About a decade ago, though, the town rose from the dead, or near-dead, spontaneously undergoing a resuscitation as people from else­where, some from far away, discovered and began to enhance, de­velop, enliven and renovate what was once a tired relic of yesteryear.

However, those who have been helping in the development of Bel­lows Falls say they don’t want the town to become so gentrified so as to lose the rough-and-tumble edges of the once-industrialized town.

At its most active and prosperous, Bellows Falls before the Great Depression boasted of more than 40 mills and factories lining the Connecticut River, with steam locomotives belching out smoke at one of New England’s major railyards. It never possessed the bu­colic ambiance of what are considered stereotypical New England burgs — such as nearby Walpole, New Hampshire, across the river, or Woodstock, a bit north of Bellows Falls in Vermont.

“I was drawn to the village because it really is a unique place wedged in between the hills and the river,” says Gary Smith, a music producer who moved from Boston to nearby Walpole, New Hampshire, in 1999 and later moved his music manage­ment and production company to Bellows Falls in 2002, locating it on the third floor of what was called the Flatiron Building in downtown Bellows Falls. Even­tually, Smith organized a local investment effort to start the popular restaurant, Popolo’s, which he manages and is now an anchor of the south side of the town’s Main Street.

Smith was impressed by the town’s older architecture, which had largely remained the same as it had looked at the beginning of the last century. At the time of his arrival, though, the town had been on a long decline, and there were some serious problems.

“My first night working here, all my tires were slashed,” Smith admits; not an auspicious begin­ning. “However, since then it’s so much nicer, and I’m charmed by how convivial it has become. We have much to offer here, and tourism will be its savior.”

Michael Bruno discovered the town more than a decade ago while driving through Vermont from his home in Long Island. There was something about it that enamored him, he says, and out of the blue, he bought a house there, as an investment. He rented it out, then decided to move to town nine years ago.

Bruno started a small jewelry store downtown that evolved into the upscale Windham An­tiques in a 7,000-square-foot storefront that once housed the original Sam’s Army and Navy Store (now called Sam’s Out­door Outfitters, located in Brat­tleboro and with stores in Keene and Amherst, Massachusetts).

“It’s really amazing the amount of tourism that we get through here,” notes Bruno. “In­terstate 91 helps, and every sea­son is different; even in the win­ter they come because they’re on their way to go skiing. Bel­lows Falls is really a very good crossroads for someone coming from Boston to Vermont, along either from Route 12 or coming on I-91.”

Bruno, like Smith, was drawn by the beautiful old architecture of the town’s downtown.

“We’re definitely on the up­swing, right now the downtown is going through an upgrade transition, a lot of firms are fixing up their buildings,” says Bruno.

Bruno is currently renovating another building downtown, an 1890 four-story Italianate brick structure across the street from his store. It will be a mixed-use building combining offices with residential units. The building next to his antique store, for­merly an old J.J. Newberry five-and-dime store, is also undergo­ing renovation, he says.

“When Bellows Falls was at its peak, in the early 1900s, it was building all these wonderful structures,” says Bruno; he ex­plains that because of the Great Depression and the severe loss of business experienced by the town, nothing of any substance was built after that.

“We don’t have any post-Depression era architecture,” he says, which turned out to be a positive in the long run since much of what followed in many other cities were architectural styles that were of­ten cheap and unappetizing.

Smith also says that the geographical configuration of Bellows Falls — stuck between the Connecticut River and steep hills — con­tributed to its being preserved.

“We were never subject to the same kind of sprawl that ruined these kinds of previously-urban environments … there wasn’t any­where to sprawl to. Wal-Mart put up its stores elsewhere, and the center of those other old towns emptied out like sand in the hour­glass,” says Smith.

The two also described a nuanced difference that exists in Bellows Falls, the balanced blending of new businesses and restaurants with older establishments that have been there for decades, as well as what might be termed “rougher edges” of the town.

“Bellows Falls is ‘truer’ in a sense, its grittiness is representative of all the gritty towns going up the river, it was hardscrabble, and people made fortunes here,” says Smith. “It was never ‘scrubbed’ in a way that the modern person thinks of New England towns.”

Patricia Fowler, who owns Village Square Books just a few doors away from Popolo’s Restaurant, says that Bellows Falls has several characteristics that make it attractive to both residents and tourists.

“Everything is walkable here; you can have a drink and a meal and walk home. We have so many of the arts here, and music, and so many community organizations where you can get involved. We’ve attracted a lot of flatlanders here,” she says, half-jokingly.

Actually, Fowler, Bruno and Smith are all “flatlanders” themselves and claim that more like them are settling in Bellows Falls, drawn by the town’s architecture, vibrancy and the relatively low cost of housing.

Fowler also says there are several gems in town, and points to the noted Bellows Falls Opera House across the street from her book­store, a fully-restored, 550-seat theater that offers first-run movies for the amazingly low price of $5, as well as other kinds of live per­formances. The Opera House is owned by employees of the Town of Rockingham and is located on the first floor of the town offices. (First-run movies are shown every Friday through Tuesday. Classic movies are shown the second and fourth Wednesdays at 7:30 p.m.)

“Downtown is almost fully occupied now,” says Emmett Dunbar, development director for the Town of Rockingham, who, inciden­tally, has his office in the clock tower overlooking downtown.

Dunbar explains the development of the downtown is part of a matrix of marketing and improvement efforts for both Rockingham and Bellows Falls. One of the marketing campaigns currently under­way is called “5 on 5” which is a clever slogan meaning that tourists can take Exit 5 off Interstate 91, onto U.S. Route 5, and drive 5 miles into Bellows Falls.

“Our town is really our town,” says Dunbar. “Almost all the busi­nesses are owned by people who live in town.”

Dunbar explains that one of the most attractive virtues of Bellows Falls is that it is honeycombed by walking trails. A visitor can walk from the town’s riverfront and hydro-electric dam, through the rail­road depot and visitor center, then to the historic downtown com­mercial trail, leading to the historic home tour, and then on up to a ridgeline trail above the town.

“We want people to see Bellows Falls as a one-day stay,” he says.

“Where is Bellows Falls going?” Smith of Popolo’s asks himself. “It’s been a town that moves ahead in fits and starts. It is so volatile out here on the edges of the economy, and when the economy con­tracts, Bellows Falls feels it. However, we’ve all brought a lot more interest to the town; we’ve created a groundswell of food and enter­tainment, and I hope the (national) economy is growing fast enough to keep it going.”

Regardless, Bellows Falls has been through much worse and has come through. ◼